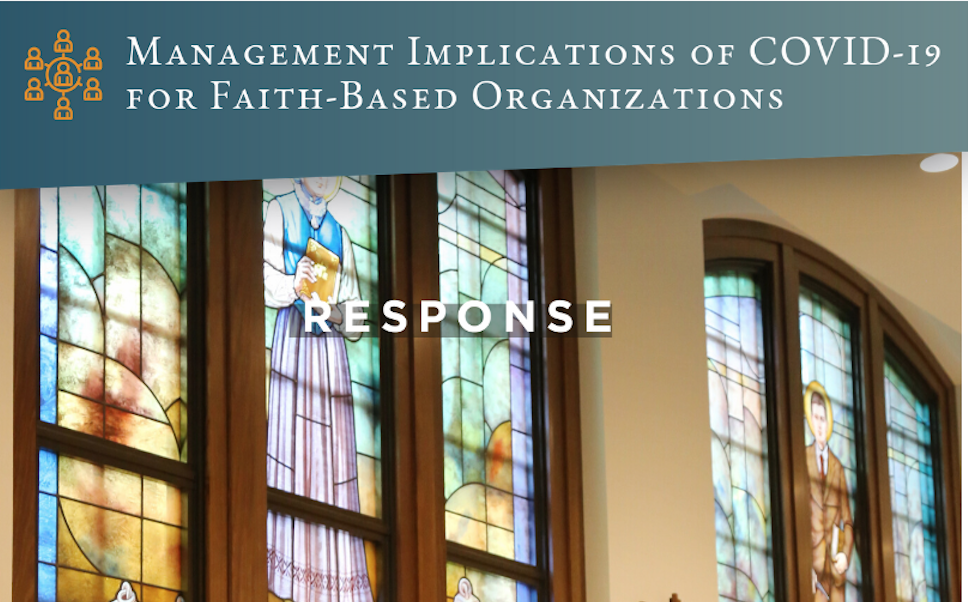 Keeping the Faith During A Time of Crisis

Replying to NLI Staff, "Stewardship: Protecting Your Faith-Based Organization Through a Crisis"

I had the privilege to visit the Congressional Prayer Room just before the pandemic broke out. Before this visit, I did not know that the United States Capitol, the symbol of our Constitution and laws, had a chapel for the members of congress! Built in 1955 and designed by an interfaith and non-partisan committee, the chapel is a small room, with an open Bible, two kneelers, a few chairs, two candles, and an American flag. But what really caught my attention was what I saw on the stained glass window: George Washington kneeling in prayer, with the words from Psalm 16:1, "Preserve me, O God, for in thee do I put my trust."

In God we trust is at the heart of our country. We have heard it so many times. Even license plates show it all over the country, in twenty states! Our nation has a deep foundation in God –a text from President Abraham Lincoln's Gettysburg address is depicted on that same stained glass, saying "This Nation Under God". But I wonder, is this a firm conviction in our minds?

Our faith is being tested. So many deaths. So many sick people. So many layoffs. So much financial distress. So much uncertainty. So much suffering.

When things go well, we repeat In God we trust, without blinking an eye. It is when the virus touches our deepest foundations that the evil one hopes we will cave into his hands, as when he challenged God with respect to Job:

“Have you not surrounded him and his family and all that he has with your protection? You have blessed the work of his hands, and his livestock are spread over the land. But now put forth your hand and touch all that he has, and surely he will curse you to your face.” (Job 1:10-11)

But Job, even after much suffering, did not curse God and remained faithful:

In God we trust. Let’s ponder what Jesus tells us: “Come to me, all you who labor and are burdened, and I will give you rest.” (Mt 11:28) And Saint Paul writes: “I consider that the sufferings of this present time are as nothing compared with the glory to be revealed for us.” (Rom 8:18)

Pope Francis in his recent address to the world from an empty St. Peter’s square, said:  “In spite of the tempest, he [Jesus] sleeps on soundly, trusting in the Father; this is the only time in the Gospels we see Jesus sleeping. When he wakes up, after calming the wind and the waters, he turns to the disciples in a reproaching voice: ‘Why are you afraid? Have you no faith?’ (Mk 4:40). Let us try to understand. In what does the lack of the disciples’ faith consist, as contrasted with Jesus’ trust? (…) They think that Jesus is not interested in them, does not care about them.” (Pope Francis’ address, Vatican, March 27, 2020).

Fr. Charles Trullols is the Director of the Catholic Information Center, appointed by His Eminence Donald Cardinal Wuerl in March 2017. Originally from Barcelona, Spain, where he graduated from the Viaro Global School, he then earned his architecture degree from the School of Architecture of Barcelona. He earned a PhD in Canon Law at the Pontifical University of the Holy Cross, and worked for four years at the headquarters of Opus Dei.