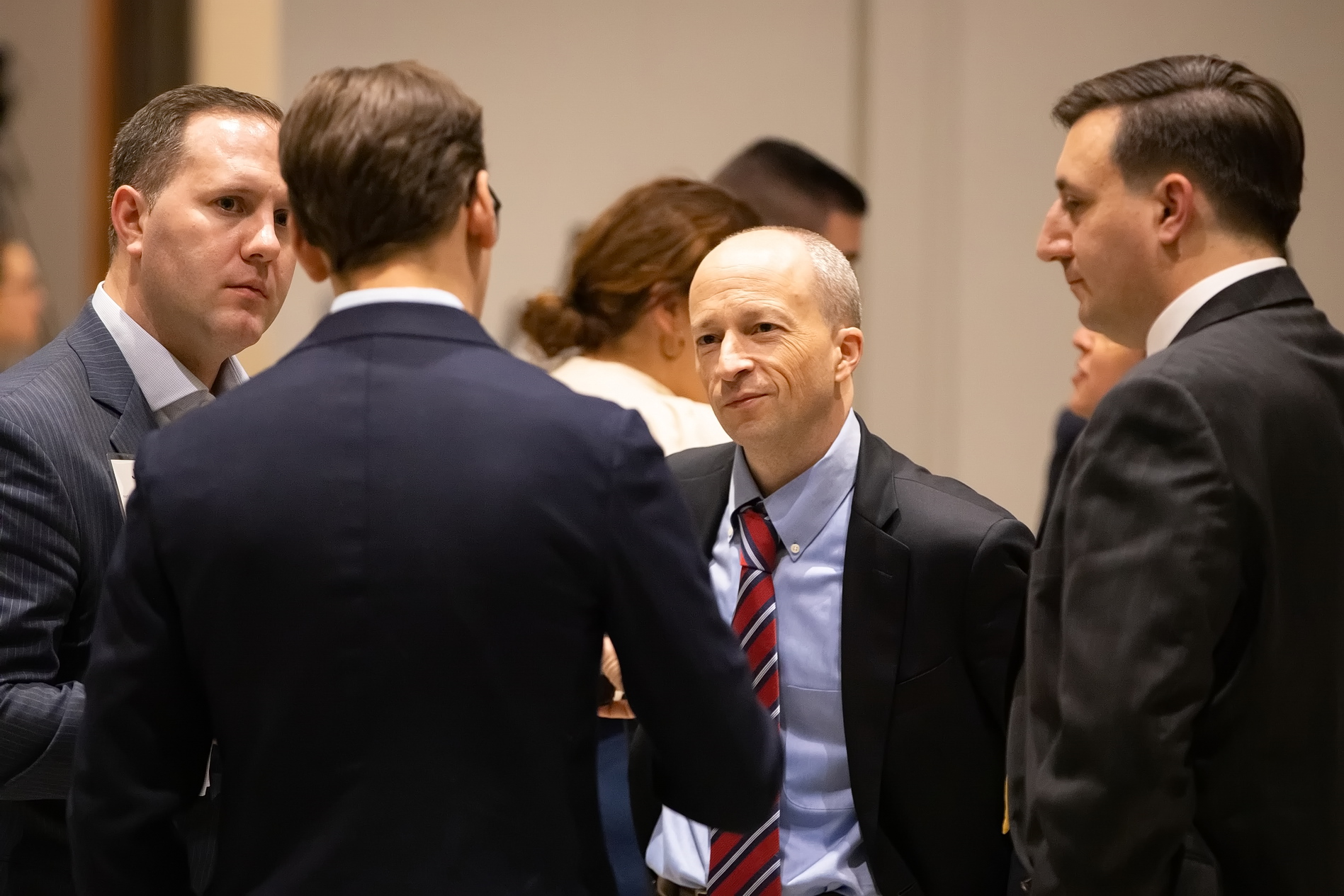 Called to Formation: How Freedom Requires a Devotional Spirit

“If we’re going to change people’s attitudes about the broader array of institutions in our society, I think in a lot of ways that has to begin in American religious life because that’s an arena where we’re already accustomed to talking about devotion, where we know what that means and where we know what a commitment to a set of ideals, a truth we live by looks as a practical matter.”

Earlier this month, Napa Legal Institute (NLI) had the pleasure of partnering with our friends at Alliance Defending Freedom (ADF) to co-host a discussion with Dr. Yuval Levin on his latest book, A Time to Build: From Family and Community to Congress and the Campus, How Recommitting to Our Institutions Can Revive the American Dream.

Taking place at the Catholic University of America’s Busch School of Business, our conversation with Levin focused on the definition and purpose of institutions; their formative function for the individual, the family, and society; and how the virtue of devotion exemplifies the way forward for recommitting to our institutions.

As Levin aptly defines it in his book, an institution is a form of association that is both durable and formative, it therefore “keeps its shape over time, and so shapes the realm of the life in which it operates.” To that end, an institution “organizes its people into a particular form moved by a purpose, characterized by a structure, defined by an ideal, and capable of certain functions.” Examples of institutions can range from organic forms such as families, neighborhoods, and civic associations to the more corporate forms such as schools, hospitals, companies, and nonprofits.

By better understanding the formative nature of our institutions we are better able to recognize the social crisis we face as a nation. From rising divorce rates and broken communities to our polarized politics and culture, it’s clear that what we’re facing is a breakdown of the institutions that traditionally serve as the framework of our social lives.

But what does it mean to recommit to our institutions, and why is that important?

While each specific institution comes with its own set of issues and challenges, there remains a commonality between them all. Every institution is only as good as the people within it, which is why each person must necessarily possess a shared virtue that ultimately empowers and strengthens the institutions to which they belong.

When asked about this virtue, Levin chose to highlight religious institutions as being, “at the center of the kind of way forward that I’m trying to chart. If you wanted one word for it, that word would be devotion.” He continued by explaining how:

“If we’re going to change people’s attitudes about the broader array of institutions in our society, I think in a lot of ways that has to begin in American religious life because that’s an arena where we’re already accustomed to talking about devotion, where we know what that means and where we know what a commitment to a set of ideals, a truth we live by looks as a practical matter.”

In other words, when we devote ourselves to institutional integrity, we find ourselves forming the institutions that ultimately form us for responsible citizenship in a free society.

Devotion as a Virtue

Devotion as a practice of virtue is most closely associated with the religious obligations one owes to God. It comes from the Latin word devovere, which means “to vow.”  According to the Catechism of the Catholic Church:

“A vow is a deliberate and free promise made to God concerning a possible and better good which must be fulfilled by reason of the virtue of religion...it is an act of devotion in which the Christian dedicates himself to God or promises him some good work. By fulfilling his vows, he renders to God what has been promised and consecrated to Him.”

Devotion is of course not just a Catholic practice, but a religious practice shared across several faith traditions. In this way, Levin identifies the spirit of devotion as a way of breathing life back into the body of our institutions. In the same way we devote ourselves to a higher power, so too should we devote ourselves to the institutions that empower the “good work” that honors God. It is by virtue of their devotion to God that the faithful are devoted to those made in the image of God—the imago Dei.

Devotion as a Practical Matter

In both his book and his remarks, Levin makes it clear that devotion as a means for social change doesn’t rely on a set of erudite policy solutions. Instead, devotion requires choosing one’s conduct based on a simple and yet transformative question: given my role here, how should I act?

This devotional framework directly challenges our modern, individualistic assumptions about our purpose, responsibility, and choices in society. In fact, this question reorients our thinking toward not just the individual good but the common good. It’s an approach that compels us to think about ourselves as part of the whole, where the whole represents the various layers of association in our lives where institutions come into being. In this way, institutionalism requires the practice of devotion, and a devotional spirit is what empowers communitarianism.

The Devotional Spirit in Action

As transcendental creatures, our needs are not strictly material in nature. Personal, spiritual, and moral formation occurs through participation in family life, local attachments, and communion with a higher power. In fact, it is because of these deeper, transcendental commitments that many Americans find themselves drawn to serve their fellow citizens, especially in places where government programs and secular institutions tend to fail.

As highlighted in a previous And God’s First post about empowering evangelization, religious organizations continue to lead the way when it comes to providing valuable social services such as healthcare, education, charity, food, and much more. According to a 2016 study from Georgetown University, religion contributes over $1 trillion per year to the socio-economic health of the United States through these types of social services. To put that number into perspective, that’s “more than the global annual revenues of tech giants Apple and Microsoft combined.”

Even the Department of Justice’s Office of Justice Programs, which funds local and nonprofit initiatives, recognizes that:

“Unlike their secular counterparts, many faith-based organizations are often uniquely suited to bring together residents and local leaders to address pressing challenges and to empower people to improve their lives, the lives of their family members, and their communities at large.”

Government has only a limited role to play when civil society is empowered to address our most demanding social needs. Religious institutions exemplify this reality because they are both formative and communitarian in nature. They are populated by devoted members who in turn devote themselves to their communities. Such institutions are the threads which weave together the social fabric of a free society.

When we think about freedom within an institutional context, we are forced to consider it in a relational sense. As previously mentioned, an institution is only as good as the people within it. Therefore, it’s important to view freedom as a formative virtue rather than a license to absolute liberation. When personal liberation or individualism is pursued in the absolute, it perverts what Levin describes as:

“A deeper, older idea of freedom that contends that, in order to be free, we need more than just to be liberated. We need to be formed for freedom—given the tools of judgment and character and habit to use our freedom responsibly and effectively. Such formation for freedom is a key part of what our institutions are for, starting with the family and spreading outward to the institutions through which we work, learn, worship, govern, and otherwise organize ourselves.”

Recommitting to our institutions begins with protecting religious organizations and their ability to fulfill their formative role in society. By their example, we can learn what it means to devote ourselves to forming institutions that in turn form us. This is the foundation of NLI’s work. Our devotion to institutionalism compels us to train, equip, and prepare the next generation of Americans to properly enjoy the blessings of freedom.

Josh Holdenried serves as Vice President and Executive Director for NLI. Before joining NLI, he was Associate Director of Coalition Relations at The Heritage Foundation, where he focused on strategic partnerships and policy promotion. He holds a B.A. in Public Policy Leadership from the University of Mississippi and a Certificate in Applied Religion in Public Policy from Pepperdine University’s School of Public Policy. He is currently pursuing an M.A. at Hillsdale College’s School of Government.